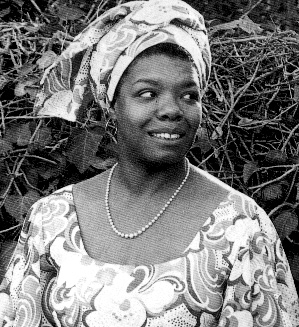 Maya Angelou was born on 4 April 1928, as Marguerite Johnson. She knows why the caged bird sings, and is only one of two American poets to write and read an inauguration poem for a president. The other one was Robert Frost for John Kennedy. Happy Birthday to Maya.

A short biography of Ms Angelou says, “Internationally respected poet, writer and educator, Maya Angelou has given us such best-selling titles as I Know Why the Caged Bird Sings, Gather Together in My Name, Singin’ and Swingin’ and The Heart of a Woman. Multi-talented, she produced and starred in the great play Cabaret for Freedom and starred in The Blacks. She wrote the original screenplay and musical score for the film Georgia, Georgia and was both author and executive producer of a five-part television miniseries, Three Way Choice.

Miss Angelou‘s accomplishments have earned her the La Home Journal Woman of the Year award in communication an Matrix Award in the field of books from Women in Communication She received the Golden Eagle Award for her documentary, Americans in the Arts, produced by PBS. She is one of the women admitted into the Director’s Guild. In 1974, she was appointed by Gerald Ford to the Bi-Centennial Commission and later by Jimmy Carter to the Commission for International Woman of the Year.

Her personal outreach to improve conditions for women in Third World, primarily in Africa, has helped change the live thousands less privileged. Here is where she gives with all her heart and soul. [Source]” And lastly, here is another of her poems:

I start no
wars, raining poison
on cathedrals,
melting Stars of David
into golden faucets
to be lighted by lamps
shaded by human skin.

I set no
store on the strange lands,
send no
missionaries beyond my
borders,
to plunder secrets
and barter souls.

They
say you took my manhood,
Momma.
Come sit on my lap
and tell me,
what do you want me to say
to them, just
before I annihilate
their ignorance?
© Maya Angelou

I Know Why the Caged Bird Sings