“Lesotho cannot wait for the UN food summit in Rome to come up with ideas, so it has developed some of its own. Mahaha Mphou does not know much about global economics, but she does know how to grow vegetables. 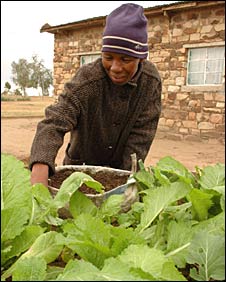 She and the rest of her family of 10 have become some of the most enthusiastic evangelists for a home-grown idea that has almost certainly saved them from starvation.”
[more…]

What’s a keyhole garden? Look at this video.

“According to the United Nations Food and Agriculture Organization (FAO) and the United Nations World Food Programme (WFP) report, issued on 12 June 2007, an estimated 410,000 people of the country’s 1.9 million inhabitants will struggle to meet their basic food needs
due to extensive crop failure after experiencing one of the most severe droughts in the last 30 years. Environmental damage caused by over farming and soil erosion compounds the problems associated with drought.

World Vision and partners has introduced an innovative
pilot project called keyhole gardens, to explore ways of improving the health and livelihoods of people through suitable sustainable farming and water harvesting techniques.

The techniques taught are specifically designed to increase the fertility and water-holding capacities of soil. The introduction of manure, combined with knowledge in how to compost and create double-dug beds and keyhole gardens, for instance, has led to farmers experiencing up to five-fold increases in crop yields.
[more…]”