The downtrodden are the future: remembering Father Gerry 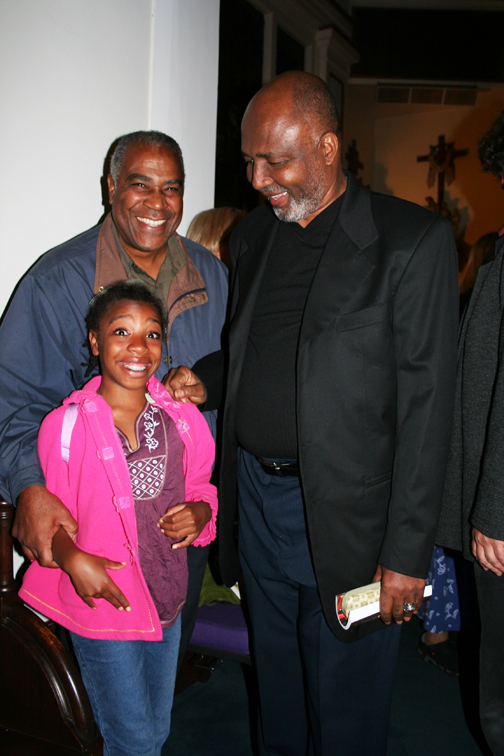 Pierre Labossiere with his daughter Malaika glow in the presence of Father Gerry Jean-Juste when he spoke on Sept. 9, 2006, at St. Joseph the Worker Church in Berkeley.

This historic interview by Minister of Information JR for Block Report Radio with the co-founder of the Haiti Action Committee, Pierre Labossiere, reveals the heart of the saintly liberation theologian and freedom fighter, Father Gerard Jean-Juste, and recalls the life of this extraordinarily popular religious, political and humanitarian leader from the perspective of a close friend who talked with him daily.

“I want us to remember him as this beautiful fighter, motivated by great feelings of love, as Che Guevarra so aptly described it, and a man who was a very loyal friend, someone who believes in the power of the poor, the power of the people, the power of each individual being, who sacrificed himself for his good, great brother, Father Aristide, President Jean Bertrand Aristide, and for the people of Haiti.

“He always had that smile on his face and he encouraged you. When you met Father Gerry, you would never know all the hardship, the torture, the beatings he went through because he was always so positive. And that inspired you.

“So it was the spirit of our ancestors that I saw in this beautiful brother. And I want to share that with everyone, that beautiful spirit that makes you conquer mountains, that makes you do the impossible. And Father Gerry, he had a saying – there is a beautiful song in Kreyol, the song of the movement (which means, in English) ‘Little by little we’ll get there. If we keep on walking steadily, we’ll get there.’ And I tell you, a long way we’ve come with him. He has led us a long way. Little by little, with decisiveness, with love and determination, we have conquered. A lot remains to be done but, in the spirit of Father Gerry, we will do it!” concludes Labossiere.