Geoffrey Philp has written a children’s book, Grandpa Sydney’s Anancy Stories, a novel, called Benjamin, My Son, books of short stories, Uncle Obadiah and the Alien as well as the more recent Who’s Your Daddy, and five poetry collections, among them Exodus and Other Poems, Florida Bound, hurricane center, xango music, and Twelve Poems and A Story for Christmas. Geoffrey blogs at http://geoffreyphilp.blogspot.com and teaches English at Miami Dade College. 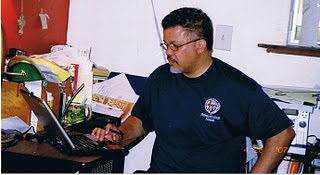 He also teaches poetry to me and to his many readers, and I’m glad today to celebrate him, and wish him a happy day of birth. Happy birthday, ntate.

A few other links:
First Love
Summer Love
From 12 Poems and a Story for Christmas

She came, they say, wearing a dress as red
as the dirt of the countryside, and stood
at the crossroads of Matilda’s Corner
shaking her fists at the mansions
on the hills. “The Spirit descended on me
to speak these words to the nation,
for they have wandered in paths
that I have not taught them.
For I have heard the cries of widows
and orphans in the streets, but the wicked
who fear neither flood nor famine,
and have built their fortresses, their walled
communities and garrisons have said,
‘Who is there like us to judge us?’
But thus sayeth the Lord of Hosts,
‘Kingston, O Kingston, how I would have loved
to have gathered you to my bosom
the way the sea caresses the shore.
But you have preferred storm and hurricane.
So I say, woe to you for you have slaughtered
my children, the old, and the crippled.
Woe to you for you have stoned and exiled
my prophets. Woe to you for your have defrauded
the homeless and the poor.” Then she ripped
her dress in two, spat on the asphalt three times,
and then, ran like a horse without its rider,
back up to Long Mountain, up into the darkness
gathering around the tops of the trees
with the smell of rain around their roots.
© Geoffrey Philp