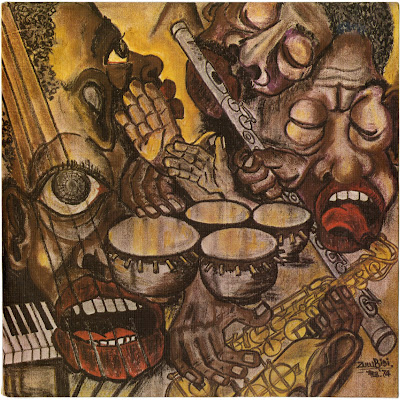 “rare indigenous afro-jazz sounds from South Africa with the release of Sowetan group Batsumi’s self-titled debut from 1974. The reissue has been lovingly re-mastered from the original tapes and features material compiled on the recent Next Stop Soweto series from Strut.

The album arrived amidst a period of intense political, intellectual and artistic ferment stimulated in large part by the teachings of Steve Biko and the Black Consciousness Movement. ‘“Say it loud! I’m black and I’m proud”. This is fast becoming our modern culture,’ wrote Biko in 1971, ‘a culture of defiance, self assertion and group pride and solidarity.’ Drawing partly on the insights of Frantz Fanon and the poets of NÃ©gritude, and partly on the contemporary US Black Power politics of figures such as Eldridge Cleaver and Stokely Carmichael, Biko forged a visionary and potent message of South African redemption, pride and defiance. It took culture to its heart, and in the wake of Biko’s message a burgeoning arts scene rooted in the black and African experience began to flourish.

Batsumi is a masterpiece of spiritualised afro-jazz, and a prodigious singularity in the South African jazz canon.