Egypt: More on the Free Alaa & no military trials campaign 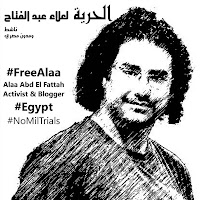 The Free Alaa campaign which works side by side with the No Military Trials for Civilians campaign [Alaa has refused to recognise the military court and continues to insist on being questioned and or tried by a civilian court] are organizing a day of action on Wednesday 9th November “Global Online Protest Against Military Trials in Egypt” [there are various actions taking place and suggestions on what to do so please visit the website].

“A letter from Cairo to the Occupy/Decolonize movements & other solidarity movements” gives detail background information on the Egyptian movement since January, the removal of Mubarak and the take over by the military Junta – since then at least 12,000 people have been tried by military courts including minors serving time in adult prisons [see Alaa’s description of the horrific conditions in prison]. 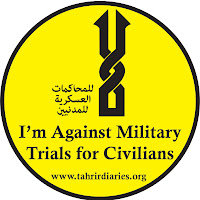 On October 9th, the Army massacred 28 of us at Maspero; they ran us over with tanks and shot us down in the street while manipulating state media to try and incite sectarian violence. The story has been censored. The military is investigating itself. They are systematically targeting those of us who speak out. This Sunday, our comrade and blogger Alaa Abd El Fattah was imprisoned on trumped-up charges. He spends another night in an unlit cell tonight.

All this from the military that supposedly will ensure a transition to democracy, that claimed to defend the revolution, and seemingly convinced many within Egypt and internationally that it was doing so. The official line has been one of ensuring “stability”, with empty assurances that the Army is only creating a proper environment for the upcoming elections. But even once a new parliament is elected, we will still live under a junta that holds legislative, executive, and judicial authority, with no guarantee that this will end. Those who challenge this scheme are harassed, arrested, and tortured; military trials of civilians are the primary tool of this repression. The prisons are full of casualties of this “transition”.

We now refuse to co-operate with military trials and prosecutions. We will not hand ourselves in, we will not submit ourselves to questioning. If they want us, they can take us from our homes and workplaces.

Nine months into our new military repression, we are still fighting for our revolution. We are marching, occupying, striking, shutting things down. And you, too, are marching, occupying, striking, shutting things down. We know from the outpouring of support we received in January that the world was watching us closely and even inspired by our revolution. We felt closer to you than ever before. And now, it’s your turn to inspire us as we watch the struggles of your movements. We marched to the US Embassy in Cairo to protest the violent eviction of the occupation in Oscar Grant Plaza in Oakland. Our strength is in our shared struggle. If they stifle our resistance, the 1% will win – in Cairo, New York, London, Rome – everywhere. But while the revolution lives our imaginations knows no bounds. We can still create a world worth living.

TWITTER:
———
Please use the hashtags #NoMilTrials and/or #FreeAlaa and mention
@manal @monasosh so that we can help spread your action, post or event.