Meet the Singer behind ‘Mulele’: A new single by Sewa.

I am introducing to you the latest Nigerian singer with the most sonorous voice. Sewa is not that new in the Nigeria music industry but she has decided to take her career to a higher level with her new single,  ‘MULELE’. 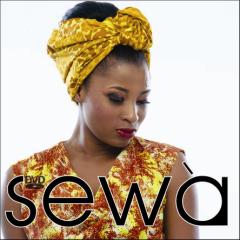 Sewa is a Nigerian singer/songwriter and a recording artist who strongly believes in God and her continent Africa. Born Ojedele Rebecca Adesewa , Sewa has worked with many Nigerian and international artists as a back-up singer. Notable among the numerous artists she has worked with are D’banj and the Mohits Crew ,Tunde and Wunmi Obe [TWO], Ego Ogbaro, Kunle Ayo , Judith Sephuma and a one-time back-up for Donnie McClurkin during the annual Rejoice Concert in 2009. She was also the sultry voice behind Charlie Boys hit ‘Ninja Bike’.
Sewa was the former lead singer of the Groovy Jazz Movement. She has worked with several other bands such as Dejavu band, Indigo band, Salt of the earth band, Mohits live band, among several others.  Sewa’s singing career started way back in church where she was a worship leader and has been privileged to serve in many churches and gospel groups as a soprano singer and worship leader.
Sewa studied Estate Management in the prestigious Yaba College of Technology and graduated in 2008 with Distinction. After obtaining her degree she proceeded to Peter King College of Music, Badagry where she studied music and majored in Guitar and voice.
Sewa’s musical style is deeply rooted in African soul and Jazz. She deeply loves the rich percussiveness of African music which she cultivates this by listening to great artists like Angelique Kidjo, Miriam Makeba, Brenda Fasi, Ladysmith Black Mambazo, Lagbaja, King Sunny Ade. She also has great affinity for soul music such as those of Sade Adu, Asa, Corrine Bailey Rae amongst others. Sewa’s sound finds a balance between these two beautiful genres of music.  Sewa loves to sing about life, dignity of labour, justice, motherhood etc. There is no subject too complex for her to interpreted into a song.  Mulele her first single is a song about the beauty and rewards of hard work. The song borrows rich Yoruba proverbs to pass the message across. It is a fusion of Jazz, African rhythm and folk. It is available for download on this link.
Follow Sewa on Twitter @Realsewa, email – sewa.official@gmail.com, Facebook – www.facebook.com/Sewa Ojedele
Nigerian musicSEWA