If capital can cross borders so can we 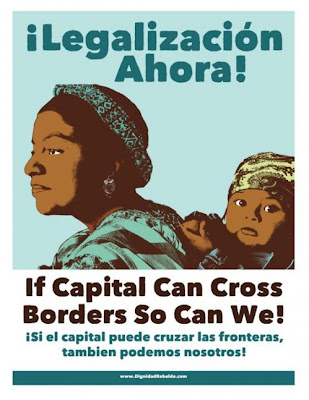 Via Sky Soil & Everything Else

I‘ve always argued that the concept of the nation state with arbitrarily drawn borders is a political fiction which is fast becoming outmoded due to the rise of supranational institutions and the ever-increasing power of multinational coroporations. In the face of these two juggernauts, the function of the state becomes that of agent and henchman – the one who provides a market for freely moving goods and at the same time prevents the free movement of persons. Immigration control is a form of selective policing – depending on the passport you hold, your movements are controlled. Now in Arizona; race and economic status are the arbitrary tools to identify ‘illegal immigrants’. What exactly does an illegal migrant look like? Latino. Poor. Speaks Little English. Has Shifty Eyes…What??? Yet this territory legally belongs to Mexico anyway, so who are these lawmaking eedjits to be legalizing racial profiling and anti-immigrant laws? Needless to say if all the currently undocumented and illegal peoples left the U.S today, the economy would take a huge hit…Mmm that wouldn’t be such a bad thing now would it?
And in all seriousness, watchout Africans and Arabs in Europe, you’re next. Italy’s already got the ball rolling.