After 14 years, Nigerian courts have ordered the government to pay compensation to Odi Town in the sum of nearly $240 million within 21 days. He described the attack on Odi as

“brazen violation of the fundamental human rights of the victims to movement, life and to own property and live peacefully in their ancestral home.” 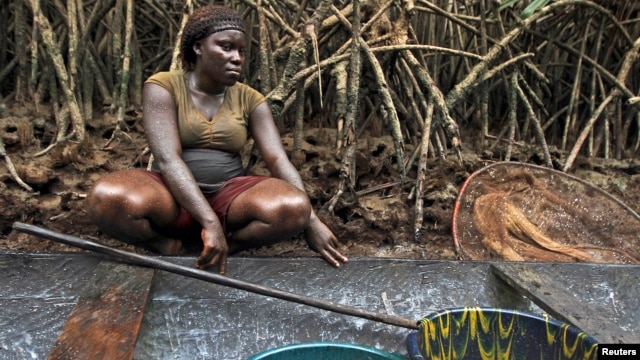 In addition to the compensation the people of Odi town have demanded an apology and the rebuilding of the town.  Odi town was one of many towns and villages invaded, destroyed, burnt, people were killed and injured during the rule of Olusegun Obasanjo – hopefully now they will one by one begin to receive justice.

In the early hours of the morning of the 20th November, 1999, 27 trucks carrying over 2000 soldiers plus 4 armored personnel carriers mounted with machine guns drove into Odi Town in Bayelsa State. Between 2pm that afternoon and 6pm the following day, the town was bombarded with artillery fire. By the end of the two days, practically every building in the town was flattened, set on fire and/or looted. In all 2,483 persons – mainly women, children and the elderly were massacred in 24 hours. Thousands more fled in canoes or on foot to the forests where they hid, some up to a week with no food or shelter.

The order to invade and destroy Odi town was given by the then head of state, President Olusegun Obasanjo. The reason given for the attack at the time was that two weeks before, 9 policemen had been kidnapped and killed in the town by a criminal gang.

Odi was not the only town in the Niger Delta where people were massacred and property destroyed during the Obasanjo years. Kaiama just a few miles from Odi was attacked January and later Oleh Town, in Delta State and Erema in Rivers State were also invaded to name a few. Then there was the terrible rape that took place in Choba, Rivers state where Nigerian army soldiers were photographed raping women. No one has ever been held to account for these past and present crimes against women and other civilians.

Mother and child outside their burnt home in Odi

In the original report on the invasion of Odi the term used for those who killed the police was “criminal gang’. This has now been revised in line with the ubiquitous use of the ‘war on terror’ narrative, to ‘militants’ and ‘terrorists’ by both President Obasanjo and Jonathan. Remember this was in 1999 and rather than put an end to militancy – there wasn’t any at this time, it is very likely the action gave birth to the militancy they now claim was the reason for the invasion. In response to Jonathan’s claim that the massacre of Odi people did not put an end to “terrorist’ acts Femi Fani-Kayode wrote

“The Governor [Alamieyeseigha, the then Bayelsa State governor] said that he was unable to do so and President Obasanjo, as the Commander-in-Chief of the Nigerian Armed Forces, took the position that security personnel could not be killed with impunity under his watch without a strong and appropriate response from the Federal Government. Consequently he sent the military in, to uproot and kill the terrorists and to destroy their operational base which was the town of Odi. The operation was carried out with military precision and efficiency and it’s objectives were fully achieved. The terrorists were either killed and those that were not killed fled their operational base in Odi.” The people of Odi town have denied the charge that the men were militants and that Odi was ‘an operational base’.

I use the invasion of Odi as an example of the extent to which militarism pervades governance and all aspects of Nigerian society – cultural, social, economic and gender justice, in Nigeria. Successive Nigerian governments both military and civilian have always chosen violent responses, under the guise of protecting citizens, to silence political protests, punish ethnic and religious conflict, evict street vendors, destroy informal settlements and remove beggars from the streets.

Group of elderly Odi women after the invasion

The award winning environmental and human rights activist, Nnimmo Bassey describes the responses to the Odi massacre and destruction of property and livelihoods in the Niger Delta as a’Blanket of Silence”. The impunity with which the murder of civilians and the extra judicial execution of alleged  criminals is never questioned.  Such is the desensitization to violence. No where in the media reports or in any other statement on the invasion, does anyone question the use of collective punishment – the massacre of 2,483 people and the total destruction of a town which can only be described as a war crime.  What arrogance and shamefulness it is that an ex-President can attempt to justify the murder of 2,483 unarmed women, children and elderly men.

When I speak of violence, I am speaking of an inclusive violence. Women have been at the center of this violence and they continue to be so.   Women have always been at the center of these acts of violence which are psychological, sexual, physical, emotional and verbal, as well as  the fear of those acts.   The true nature of the gendered violence which comes from the relationship between the militarized ruling elite and multinational oil companies, is obscured by the focus on supposed militants and or criminal gangs. In June 2009 the government of the late President Yar’Adua bombed Oporoza town, Gbaramatu Kingdom, in Delta state supposedly to ‘root out’ militants. Yet not a single militant was killed and there is no real evidence that any were present. Once again women, children and elderly men were killed and driven out of the town to hide in the swamps. Many trekked for days before reaching the city.  Later some 2000 women and children were placed in a refugee camp outside Warri run by women’s rights activists from Rivers State.

In the post amnesty period, 2009 to the present much of the violence against women has come from cultist and criminal gangs empowered by the culture of violence around the protection of oil production and bunkering. At the same time women have become increasingly disempowered through the perpetual violence and the loss of their livelihoods as market traders, farmers and fishing. Many women have had to move to Port Harcourt and despite the hardship and poverty of living in the city, they remain fearful of returning to their villages.

It is now 2012, the militants have been given amnesty yet the region remains heavily militarised and it is impossible to move by water or land from village to village or town to town without facing a checkpoint. In a 2011 audit of security forces carried out by myself and Emem Okon of Kebetkachie Womens Resource Center, Port Harcourt,  we listed the following security in the region.

The multinationals [Shell, Chevron, Agip, Elf, Mobil] all have their own private security personnel as well as a close political, economic and general working relationship with the various Nigerian security forces. Since the 2009 amnesty many of the ex militants have been employed by oil companies as security. In addition there are criminal / cultist gangs at work in urban centers and villages especially in those where there are oil facilities; There are also ex militants, church and other institutional security forces.

The culture of militarism is thus an all pervasive one which impacts directly on the rights of women as it extends into the domestic sphere, traditional spaces and the environment through a systemic destruction of the ecological system.

* The phrase ‘Memory Hole’ is taken from an article by William Finnegan in the New Yorker.

← Haiti – Reframing the narrative
The Week on Sunday (weekly) →